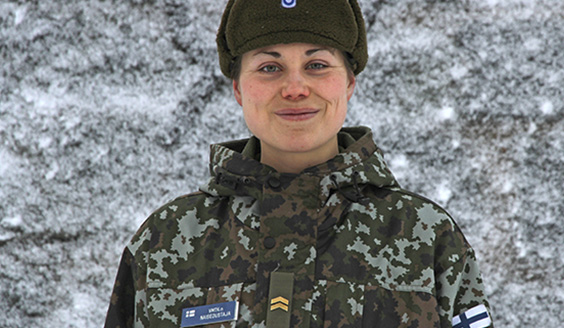 I was one of those women. I remember having quite a few butterflies in my stomach when riding my bicycle to the selection event and interview in Oulu's Hiukkavaara one April morning. Constantly, self-critical thoughts kept popping up: am I fit enough for military service? Do I really want to commit to defending Finland for the rest of my life? What if the service is emotionally to draining? Am I of any use to the Finnish Defence Forces Still, at the same time I felt excitement. I was about to start something that I had planned on for years. I knew that if I chickened out now, I would regret it for the rest of my life.

Though, I had thought of the meaning of military service already in February when I sent the application papers. The applications and all other necessary documentation should be at the regional office that your municipality belongs to, on 1 March at the latest. The application for voluntary service contains your personal information as well as your wish on which contingent you want to start your service in. In addition to the application, you should include the "questionnaire concerning service and for the evaluation of your state of health" and a medical certificate on your state of health. If I wasn't serious about going into military service, the amount of paperwork alone would have made me quit the process. Despite being periodically prone to laziness, my papers were sent on time, thus taking me a step closer to military service.

The selection event itself was very successful and informative: we learned about the defence forces from almost 40 women. There were both women who were completing voluntary service and those who were professional officers. We got answers for many of the burning questions and we also got to try on the different heavy rucksacks.

At the end of the selection even were were all interviewed and met with a doctor. I felt very nervous about the interview at first, but we soon found a common interest in long distance running with the interviewer and I left the room feeling good and relaxed. Likewise, my fitness classification was the best, A class. When I left for home , there was no doubt in my mind: military service was for me. 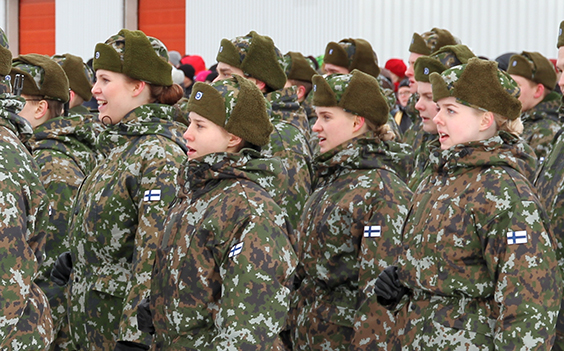 At the end of the spring I received the call-up orders. I would begin my military service in the Jaeger Brigade in Sodankylä on 4 July 2016. I got a travel voucher together with the orders, it would pay my trip to the service location. On the morning of the first Monday of July my journey began. On the bus, with my eyes, I tried to look for others headed to the garrison, "young men and women who looked scared" , as my boyfriend called them. I wasn't too nervous anymore, I listened to Maj Karma's "Sodankylä" in my player and was interested to see what was to come.

The first weeks were full of activity from early morning until late at night: there was a lot to learn in a short amount of time and on many nights there wasn't too much time for rest. Those first weeks were absolutely the hardest in my military service, not so much physically but mentally.

Out of the twenty women who started their service in the Logistics Company with me, approximately one third went back to civilian life during the first three weeks. Some saw that the army wasn't what they had expected; others' bodies couldn't take the physical strain or an injury or an accident forced them to quit. Out of the six women in my barracks room, only two of us swore the military oath when the time came. We are both corporals now and neither of us has regretted the decision to complete military service. Also my current barracks room companions are happy that they joined the army and were glad to be serving in the Jaeger Brigade.

"Sodankylä was the place where I wanted to serve and I had it as my first choice. I want to be trained in arctic warfare, and also the garrison is close to my home", said my friend from Savukoski. My other barracks roommate has similar thoughts: " I specifically applied to Sodankylä, although the Rovaniemi garrison would have been closer to home. I had heard that the training in Sodankylä is challenging and of good quality." Both women have got those experiences they hoped to get; equal effort is expected from men and women and both peers and instructors have treated the women doing their voluntary service equally. "I was expecting stricter discipline and the service has been lighter than I thought it would be." The amount of rules and formality first surprised both women, but they soon learned the proper forms of address. They are happy with the amount of information available on military service for women; both conscript leaders and salaried personnel were helpful giving information and sharing their own experiences to make the beginning of the service easier. 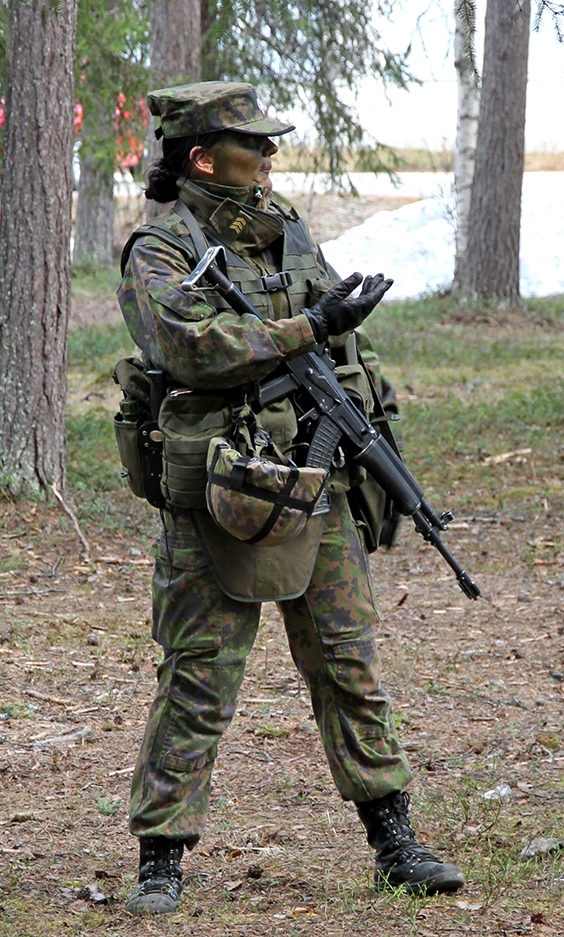 Military service offers the same opportunities for training for men and women. Likewise, the physical requirements are the same for both sexes and there is no special treatment for women or quotas for women in different training programmes or branches, Therefore, getting the specialist training you want is up to your skills and motivation and sometimes also your civilian occupation.

My personal goal since the beginning of military service was the medical non-commissioned officer (NCO) course and at the end of August I got my wish and got orders to Kajaani where the medical NCO course is held. Approximately 60% of the women who do military service also get leadership training; either the NCO course or the Reserve Officer Course. Generally, women are motivated to do well in the service, perhaps particularly because it is voluntary for women and many are willing to dedicate a year of their life to do military service.

Almost all of the women who started their training at the same time as I did wanted leadership training and all of them also got to the NCO or Reserve Officer Course. They were willing to put in the effort to achieve their goals and to put in extra effort, even so much so that a friend of mine from the basic training period is now the Secretary General of the Conscript Committees.

My NCO student time, three months in Kajaani training in field medicine, was very gratifying, both in terms of knowledge and also socially; I became as close as family with those I shared a barracks room with and my motivation remained high thanks to meaningful tasks and training.

Particularly the second half of the NCO course just flew by as we practised inserting cannulae and needles as well as first aid skills among all the leadership training. The NCO course solidified the idea that the medical branch was the right one for me, not only was it interesting but I will take some skills home for civilian life as well. 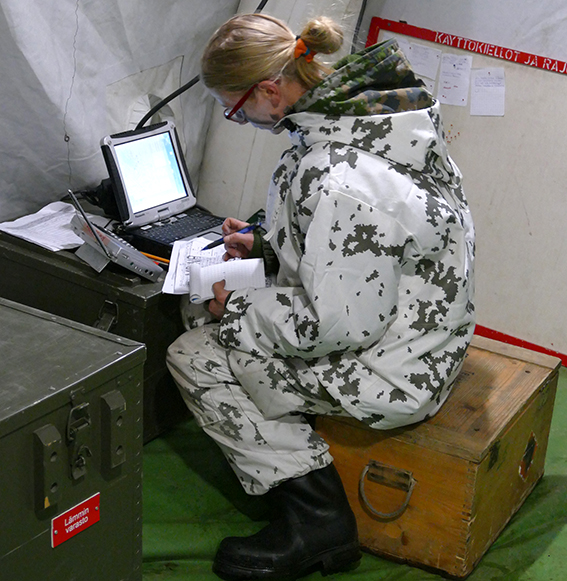 After coming back from assignment in Kajaani shortly before Christmas I was appointed the female representative of the Conscript Committee, as I had requested. I will now try and take care of the matters for all of use women serving here in Sodankylä, both of the new 10 female recruits as well as those of us who have been here longer. Living in a male-dominated environment can be weird at first and being in the military is somewhat different for women than men, so that is why a female representative is needed. Women have some hobby clubs and a women's information night is already a traditional chance to chat about what it is like to be a woman in the military. I want to do my part in organising something nice to do among just us women, like meeting for coffee at the soldier's home during personal time, not that the busiest first days are behind us.

The experiences of the brigade-sized units' in the military are positive. The women are motivated, good comrades in arms and provide a positive example for their entire unit with their attitude and defence will. That is why I can state that the military is both a woman's and a man's world. The limitations set by gender for graduating some training, such as border jaeger training for example, are all in all quite small. It comes down more to your own attitude, physique and your will, just like with the men. On my behalf I warmly welcome all women to military service; your knowledge and skills are needed and valued in the Finnish Defence Forces! 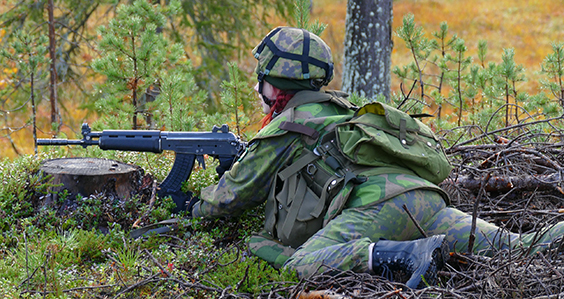