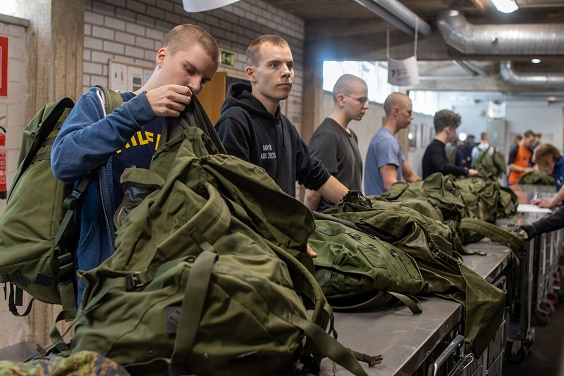 On 4 July 2022, altogether up to 12,000 conscripts and persons undertaking voluntary military service for women will start their service.

On Monday 4 July 2022 in the Finnish Defence Forces and in the Finnish Border Guard, altogether up to 12,000 conscripts and persons undertaking military service for women will start their service, the majority of whom will do so in the Army. The highest number of conscripts will be received by the Pori Brigade in Säkylä and Niinisalo, and the Karelia Brigade in Vekaranjärvi, with their total conscript strength slightly above 2,000 in each.

At the brigade-level units, the July ’22 contingent will return back to the normal service and leave rhythm if the corona situation so allows. This means that, as a general rule, training will be undertaken on working days, and weekends will be off.  The exceptions will concern, among others, on-duty shifts for readiness and inter-agency cooperation, as well as more extensive military exercises. The leave rotation of 4+2 (four weeks of training, 2 weeks leave from other service) that was applied during the corona period will now be abandoned. However, depending on the local circumstances, the practice of separate cohorts of conscript detachments will continue to be implemented. In case the corona situation deteriorates, the necessary amendments can be made by the decision taken by Commander of the given brigade-level unit.

– The Finnish Defence Forces is an organisation of exceptional circumstances with sustained capability for adapting its activity rapidly and resiliently to the requirements of the situation, Defence Command ACOS Training, Colonel Kari Pietiläinen points out.

From a military angle, the situation in regions close to Finland is peaceful, and Finland is not subject to any immediate threat. In the Finnish Defence Forces, the conscripts undertake military training for tasks on national defence missions. In this context, the training of conscripts and voluntary women continues for these tasks as usual and no substantial changes are planned to their role. Training arrangements do get to be reconsidered on a regular basis as part of normal development of activity, which in turn also considers the observations made relating to, among others, the war started by Russia in Ukraine. According to Colonel Pietiläinen, the criteria for conscript training and voluntary military service for women will not change due to a possible NATO accession.

– The service arrangements and status of the contingent that starts their service now will remain identical with those of the previous contingents regardless of the accession application or a possible accession.